The 29th of August 1715, five ships belonging to Tsar Peter the Great (1672-1725), left the northern port Archangel with destination S:t Petersburg in the Baltic. They were the “Royal Transport”, “Uriel”, “Salafail”, “Varahail” and the “Yagudiil”. 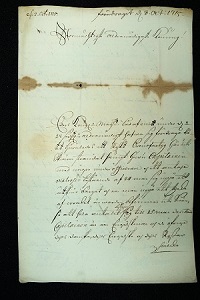 Royal Transport” was an Englishman by the name of Thomas Hutchinson (16xx-1743).

The ships got separated during the voyage. The “Uriel” and “Salafail” reached Copenhagen i December, the “Varahail” wintered at Flekkö, in Norway, and the “Yagudiil”, after putting back for repairs, wintered near Trondhjem in Norway.

In the late September 1715, the “Royal Transport” had reached Kattegat but encountered severe weather and current, forcing her on the 25th of September, to seek shelter in the Swedish archepelago. She was spotted by the Swedish navy, but the weather was to severe for them to be able to approach her. The “Royal Transport” was firing her canons for help, the English flag was flying in the wind. The next day, the 26th of September, her anchors broke loose and she foundered on a reef and sank.

Out of her crew of 50 men only 24 survived. Captain Thomas Hutchinson and the surviving crew members was taken to custody and put in jail in Gothenburg town hall. In November 1715 Thomas Hutchinson was transferred to Carlstens (Marstrands) castle outside Gothenburg, were he was imprisoned at least during November and December 1715.

It looks like Thomas Hutchinson shortly thereafter was released from prison and spent the rest of his life in Gothenburg.

In March 1718, 16 Russian crew members were exchanged at Wisingburg.

In July 1736, Thomas Hutchinson seems to be working as a clerk. He was involved in a court case concerning gambling at a restaurant called “Stadskällaren” in Gothenburg. William Chalmers Sr (16xx-1759), was one of the other gamblers.

In November 1738, Thomas Hutchinson was involved in a dispute with a captain by the name of Thomas Scott and his ship “The Ann”.

In May 1743, Thomas Hutchinson is declared dead. It seems like he belonged to the German church “Christine church” in Gothenburg.

In November 1743, Thomas Hutchinson´s belongings, he is now mentioned as a merchant by the Governor of Gothenburg, is to be shipped to his relatives in England.

When William Chalmers Sr died in 1759, he left behind a gold ring with the inscription Thomas Hutchinson.

To the reader…..if you have more information concerning Captain Thomas Hutchinson´s life and whereabouts, please contact me on   jan@fredriksson.it